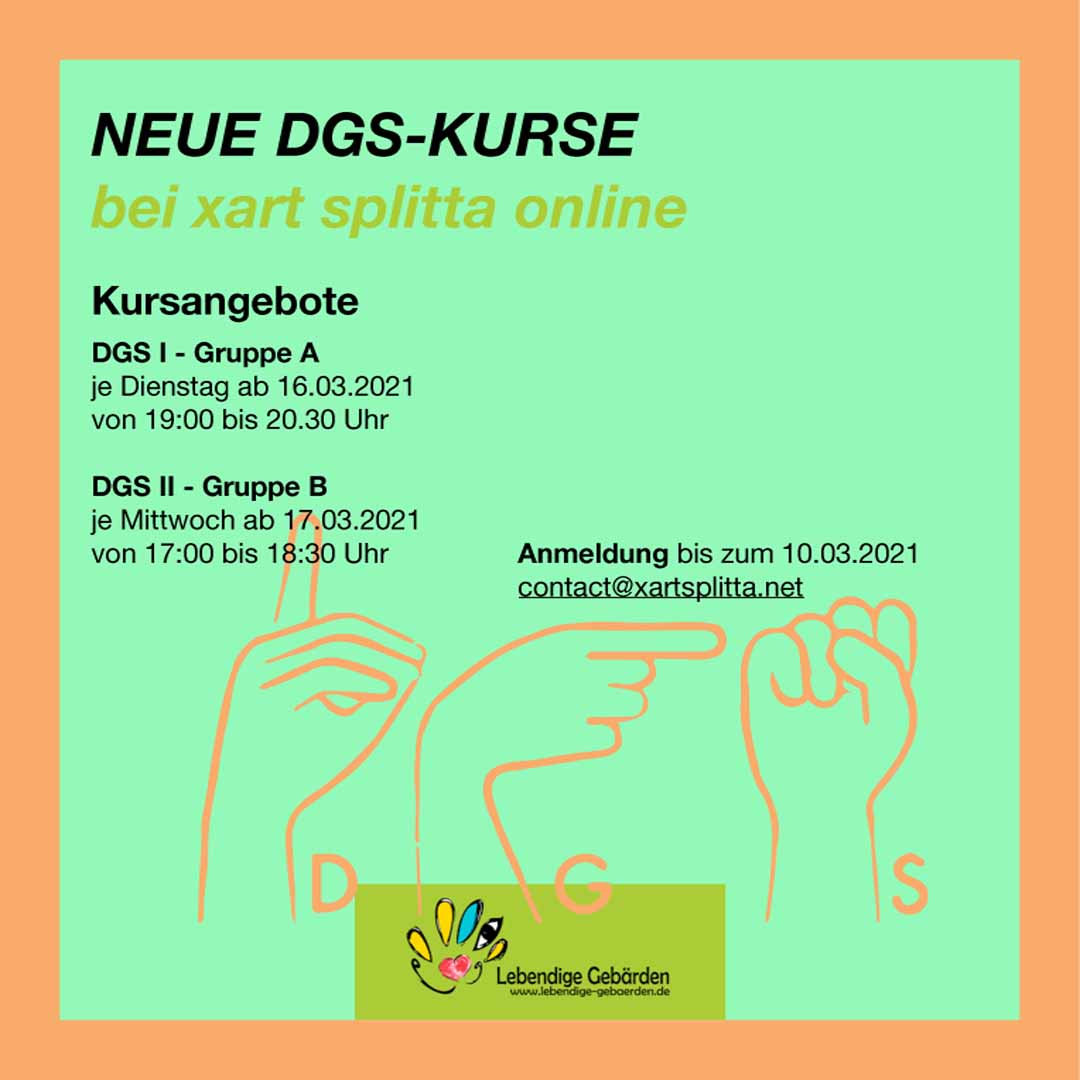 *These courses will take place in German Sign Language.* 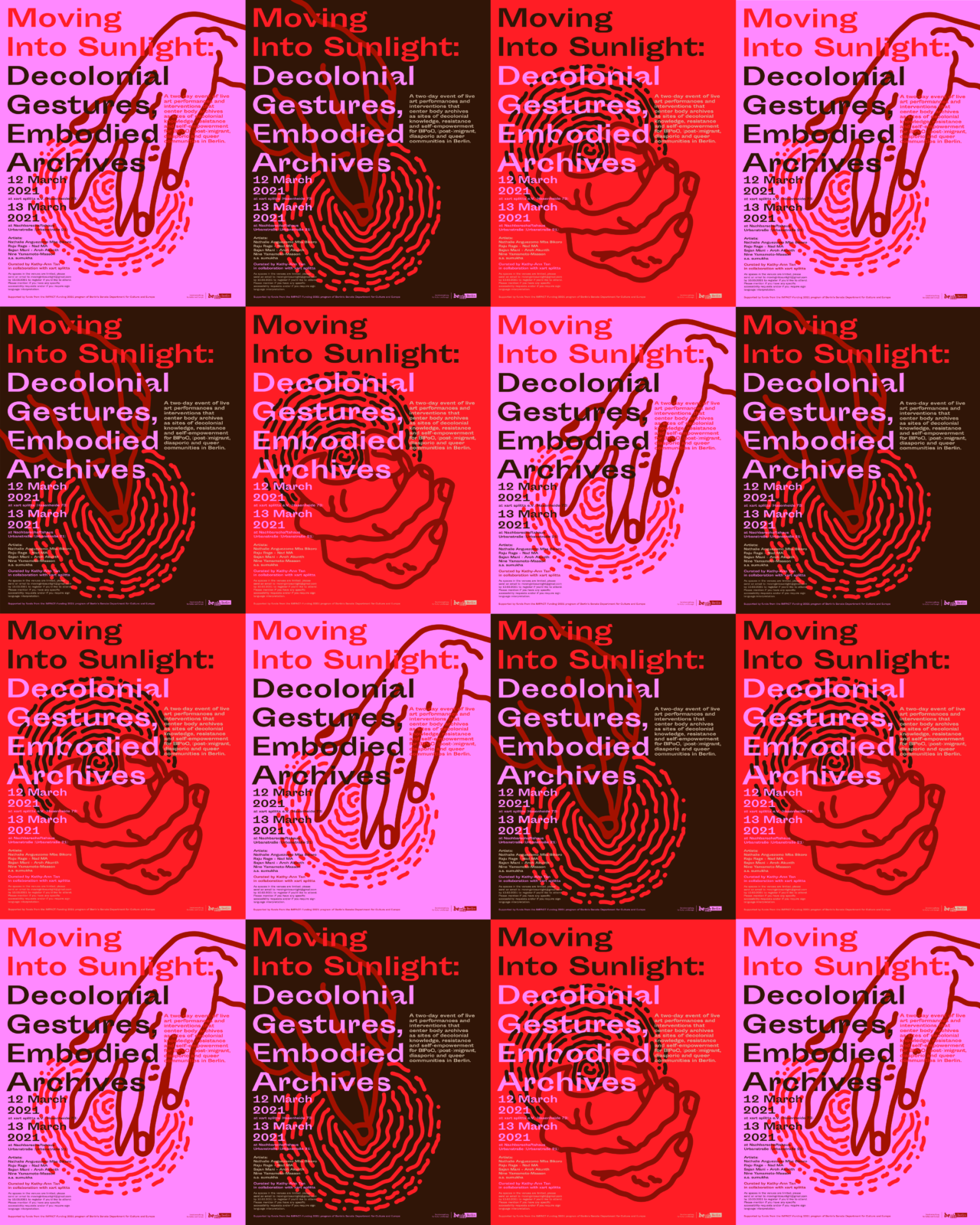 A two-day event of live art performances and interventions that center body archives as sites of decolonial knowledge, resistance and self-empowerment for BIPoC, (post-)migrant, diasporic and queer communities in Berlin.

Curated by Kathy-Ann Tan in collaboration with xart splitta.

Audre Lorde writes of the erotic as a deeply motivational and empowering force that lives within the bodies of womxn of colour. In centering the knowledges, histories, laughter, struggles, resilience and power of queer and BIPoC lives, “Moving Into Sunlight” disrupts and explodes the western, colonial gaze that has, for centuries, collected, “studied”, dissected, racialised, sexualised and regulated these subjectivities. Our bodies are our archives. They hold, store, keep safe, react to and process experiences of trauma, joy, shock, illness, excitement, pain, etc. For postcolonial, migrant and diasporic subjects, the body becomes a primary site for resistance and empowerment, for self-representation and transformation, for immersive experiences of connection with the lives and legacies of those who came before. The fight for social justice, accountability and reparations is far from over, and this event invites artists, cultural workers, activists, scholars and all those who feel this speaks to them in one way or another, to come together in the spirit of sharing, care and collective strategy.

The event will be held in spoken English and German and entirely online. BIPoC and (post-)migrant residents from the neighborhood of the venues in Berlin-Kreuzberg/Neukölln are especially welcome. Please send an email to movingintosunlight@gmail.com by 10.03.2021 to register if you would like to attend. Please mention if you require sign language interpretation.

“Where Is Your Fire?”
what to say to you now in the soft afternoon air as you hold us all in a single death i say “where is your fire?”

Excerpt from “Catch the Fire” by Sonia Sanchez

Anguezomo Mba Bikoro presents “Where Is Your Fire”, a mourning ritual drawing on archival material of Black Abolitionist women retracing the story of a lost 19 th century court case of the murder of a Herero Princess and a stolen African German theatre script. The artist follows the multiple routes of Black Feminist writers interlaced through fictions of botanical colonial fictions transmitting testimonies of anti-colonial struggles and warnings in the mythical spirit of Drexciyan uprising.

Sajan Mani is an intersectional artist hailing from a family of rubber tappers in a remote village in the northern part of Keralam, South India. His work voices the issues of marginalized and oppressed peoples of India, via the “Black Dalit body” of the artist. Mani’s performance practice insists upon embodied presence, confronting pain, shame, fear, and power. His personal tryst with his body as a meeting point of history and present opens onto “body” as socio-political metaphor. Several of Mani’s performances employ the element of water to address ecological issues particularly related to the backwaters of Kerala, as well as to the common theme of migration. His recent works consider the correspondence between animals and humans, and the politics of space from the perspective of an indigenous cosmology. Aroh Akunth is a Dalit-Queer Interdisciplinary artist currently based between Göttingen and Delhi. They hold a Bachelor’s in Social Sciences and are currently pursuing their Master’s in Modern Indian Studies. They are also the founder of Dalit Art Archive and Dalit Queer Project initiatives that center the narratives of their communities. As an artist, they are interested in exploring Caste and Queerness as worlds through their experiments with words, sound, visuals, and performance.

Aroh Akunth is a Dalit-Queer Interdisciplinary artist currently based between Göttingen and Delhi. They hold a Bachelor’s in Social Sciences and are currently pursuing their Master’s in Modern Indian Studies. They are also the founder of Dalit Art Archive and Dalit Queer Project initiatives that center the narratives of their communities. As an artist, they are interested in exploring Caste and Queerness as worlds through their experiments with words, sound, visuals, and performance.

“Shambuka” is a performance piece that locates the continuing legacies of Hindu Epics and Caste Apartheid within the politics of the Indian Subcontinent in the 21st Century. Over the years murder of Shambuka, has been of academic interest to Anti-Caste scholars like Ambedkar and progressive artists alike. Where Eklavya was penalized for dreaming as an Avarna person, Shambuka paid the price for succeeding in a Caste society. The performance encourages people to think of the ways in which Caste supremacy informs and interacts with Identities we embody and what it means for peoples whose bodies are marked by Caste to be stuck in a metaphorical loop.

Raju Rage is a tender Taurean. They are also an artist and creative educator working with healing and care processes and practices. Raju uses tools of transformation and resilience in the face of predation and extractivism of hetero and homo normative cistems.
@Raju_Rage

Nad MA is a truly sensual Scorpio. They practice with corporeality and the politics of the body as a massage therapist, body piercer, shibari teacher, drag king and workshop facilitator. They are also interested in spirituality and healing of all beings.
@Nadnadius

Nine Yamamoto-Masson is a French-Japanese artist, theorist, writer, researcher, and translator. In academic research, artistic and activist practice, her work analyses the gendered necropolitics of (neo)coloniality with regard to the legacies of European and Japanese colonialism how they presently manifest as configurations of power and economies of knowledge that exert violence on bodies and futures. She studies the modes of organisation of networked resistance, and the workings of resistant memory challenging hegemonic dominant narratives, focusing on the role of art and inter-diasporic, internationalist, inter-generational solidarities. She is a PhD candidate at the University of Amsterdam.

“Nobody Died” traces the friction of different forms of confrontations over the grieving of lives that are systematically devalorised and violently harmed or taken, in the context of how racialised and gendered violence accumulates in individual and collective bodies, itching under the inflamed scars like glowing constellation maps that reach forward and back through time and across the globe, across generations. It incorporates a video an installation of collages and drawings based on photographic documentation of the tense changes (and corresponding messaging) at street-level in NYC in spring/summer 2020, where the artist was stranded due to Covid, being like so many forced to improvise mourning rituals to honour the dead in the face of an ever-intensifying white supremacist hierarchy of emotions. The video reading Is a Film a Bone (2020) is part of a ritual. It is about the labour of mourning, about how to do right by the dead, about the battles to reclaim the past and reappropriate the future. It is about the hidden wormholes connecting the different space-times the artist is entangled in. It is about how to live with fire, and its role in midwifing a new world.

a.s. sumukha is a poet, scholar and activist.

Iris Rajanayagam is a historian (MA Humboldt University Berlin). She works on post- and decolonial theories, intersectionality, politics of memory and social change; She is director of the organisation xart splitta and lecturer at the Alice Salomon University of Applied Sciences Berlin. Besides this Iris Rajanayagam is board member of the Migrationsrat Berlin and was active in the Caravan for the Rights of Refugees and Migrants for many years.

Rena Onat is a gender equality officer (Frauen*beauftragte) and an art and media scholar. She is currently working on her doctoral thesis on artwork by QTIBIPoC artists in the German context, highlighting expressions of queer of color critique in and through art and visual culture. She is a turkish-german femme of color who likes horses.

Yergalem Yagi Taffere has many irons in the fire. If she could, she would be in a different place every weekend, listening to the important stories of different people and their own diasporic realities of life. She is a director, photographer, performer and DJ. She is currently working on “Yagi’s Kaleidoscope”.

May Zeidani Yufanyi is a social scientist; in her work at Inssan e.V. she deals with antidiscrimination and postcolonial migration societies in Europe, asylum and migration policies. As a Person of Colour and migrant with Muslim and Jewish roots in Palestine and Europe, intersectional approaches play a central role in her work.

Magnus Elias Rosengarten is a writer and artist, currently based in Berlin. In his work he explores bodies and narrative—via text, performance, moving image, and the disembodied voice—that move and continuously manifest throughout the global Diasporas. He studied at Humboldt University in Berlin and completed his Graduate degree in Performance Studies at New York University, Tisch School of the Arts.

Sophya Frohberg is a curator and researcher based in Berlin. Her work attends on visibility of Black, queer and intersectional contemporary art, as well as radical decolonial practices within cultural institutions. She currently researches ways of responsible, non-hierarchal curating with her working group CCC – Curating Through Conflict with Care.

Kathy-Ann Tan is a Berlin-based curator, writer and independent scholar of visual art and performance, postcolonial and decolonial theory, and gender/queer studies. She is interested in alternative models of art dissemination, exhibition-making and institution-building that are attuned to issues of social justice in the contemporary moment. Her ongoing project decolonialartarchives aims to collaboratively build a forum for artists, curators and cultural workers to develop ways of interrogating colonial narratives.

The event is taking place within the framework of the project “Thinking Communities in Solidarity“, funded by the LADS ((Berlin State Office for Equal Treatment and against Discrimination of the Senate Department for Justice, Consumer Protection and Anti-Discrimination).