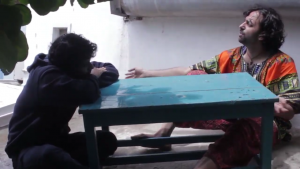 The screening will be followed by a presentation by and Q&A with the director Deepak Srinivasan.

Harihar is a common male Indian name. ‘Hari-Hara’ is a composite Sanskrit term meaning a coming together of Shiva-Vishnu’s energies, Shiva and Vishnu being two male gods. In the film, a young man, Harihar, gets dragged to an event by his mother where he finds a storyteller, telling the story of god, Shiva’s conflict with a demon who gains a powerful boon from the god that backfires. As the popular mythical story goes, god Shiva is saved from the demon by the helpful intervention of a trickster male god, Vishnu. The South-Indian version of the story goes on further to narrate the resulting romance of the two gods and the birth of their offspring, the god Ayappa (also named Hari-Hara). As Harihar listens to the story, repressed adolescent desires surface as he finds an affirmative voice within his tradition and cultural milieu, which (he previously may have felt) had shunned him. He comes to terms with his own self and comes out regarding his sexuality.

Deepak Srinivasan is a Bangalore-based performer, storyteller, designer and educator with 15 years of practice in performing arts, radio, film, community media, design and pedagogy. After a BSc and MS in earth and life sciences, Deepak’s interests shifted to media, art & design as methods for trans-disciplinary inquiry.
Deepak has trained in performing arts and community theatre with prominent Indian theatre practitioners (2005-2008).
His work in community theatre has spanned many youth groups and other special communities such as street-based sex-workers. His interests include gender, ecology, creative education design, urban space design, knowledge system practices, modernity and its intersections with historic process, oral histories and collective memory. Deepak presently has his own Design Practice and is Adjunct Faculty at School of Design, Presidency University, Bangalore.

The screening is free of charge. Donations are warmly welcome!