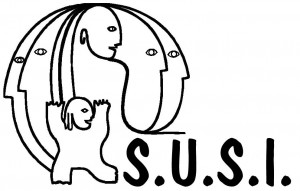 Intercultural Women's Centre S.U.S.I (susi-frauen-zentrum.com/ und facebook.com/susi.frauenzentrum/). Jamile da Silva e Silva (Project Coordinator S.U.S.I) will give a short introduction to Sankofa Kita before the screening.
---
About the director:
Haile Gerima is an independent filmmaker and professor of film at Howard University in Washington, D.C. Born and raised in Ethiopia, Gerima emigrated to the United States in 1967. Following in the footsteps of his father, a dramatist and playwright. Gerima studied acting in Chicago before entering the UCLA School of Theater, Film and Television, where his exposure to Latin American films inspired him to mine his own cultural legacy. After completing his thesis film, Bush Mama (1975), Gerima received international acclaim with Harvest: 3000 Years (1976), an Ethiopian drama that won the Grand Prize at the Locarno film festival.
After the award-winning Ashes & Embers (1982) and the documentaries Wilmington 10—U.S.A 10,000 (1978) and After Winter: Sterling Brown (1985), Gerima filmed his epic, Sankofa (1993). This formally ambitious tale of a plantation slave revolt was ignored by U.S. distributors, but Gerima tapped into African American communities, and booked sold-out screenings in independent theaters around the country.
In 1996, Gerima founded the Sankofa Video and Bookstore in Washington, DC., a cultural and intellectual space that offers opportunities for self-expression, interaction, discussion and analysis through community events such as film screenings, book signings, scholar forums and artist showcases. Gerima continues to distribute and promote his own films, including his most recent festival success, Teza (2008), which won the Jury and Best Screenplay awards at the Venice Film Festival. He also lectures and conducts workshops in alternative screenwriting and directing.
cinema.ucla.edu/la-rebellion/haile-gerima
Interview with Haile Gerima: aperture.org/blog/love-visual-haile-gerima/
---
About Sankofa Kita:
Sankofa is an Afrocentric and bilingual early childhood program for children between the ages of 1 and 6 in Berlin, Germany. It was founded by a group of parents and parents play an active role in the overall management of the Kita. Sankofa is a safe space for Black children in which they may develop without inhibitions and cultivate a healthy sense of self. At Sankofa, our children will practice empathetic and respectful interaction towards one another and our surroundings.
Sankofa’s pedagogical concept focuses primarily on free and imaginative play. Through this, children are given the opportunity to develop creatively, fine-tune their social skills and confidently own their natural initiative. Movement, arts, music and interaction with nature are other central aspects of our concept.
Trailer: vimeo.com/168635272
For more Information pls. visit:
www.sankofakita.com/
www.facebook.com/sankofakita/