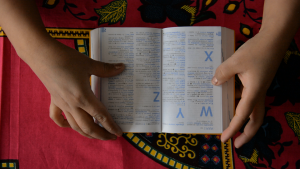 (esp., eng. subtitles) a critical analyses of instructional material used in so-called german “integration” courses and part of the exhibition project “man schenkt keinen hund”, which interrogates the identitarian discourses around the concept of “integration”. followed by a discussion with the filmmaker karen michelsen castañón and the protagonist mauricio pereyra.

using various artistic approaches, the research project “man schenkt keinen hund” interrogates the identitarian discourses around the concept of “integration,” it looks at the pedagogic formulation and iconographic design of german textbooks for integration courses.  for example, how the characters and individuals that appear in the photographs, illustrations, and texts are distinguished as either “immigrants” or “natives”? which definitions of the “familiar” and the “other” are inscribed in the teaching materials? how are (national) identity and language positioned in relation to each other, and what concept of culture is deployed to produce cultural difference?