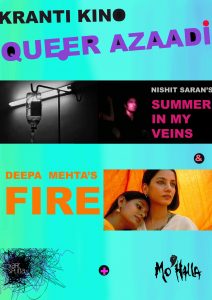 Mo’Halla presents a joint screening of two films that have come to be treated as defining moments within queer cultural history in India.

Summer in My Veins (Nishit Saran, 1999, 41 mins) is an intensely personal autobiographical account of the director who takes an HIV test after finding out that a man with whom he’s had unsafe sex is HIV positive. Before he can get the results of his test though he’s committed to a trip with his mother who he’s decided to come out to.

Fire (Deepa Mehta, 1996, 104 mins) is a hugely controversial commercial film about two women married into the same traditionalist household, who find intimacy and love in each other within the oppressive confines of Indian domesticity.

Through the juxtaposition of these two very different films on queer identities in India, we aim to bring to light the sheer diversity of voices and intersectionality within the queer landscapes of the subcontinent.

Following the screenings there will be a talk with guest speakers Saboura Naqshband and Maya Indira Ganesh around the differential and unequal claim that gay men and lesbian women have had on queer dissident discourse in India, as is evident in the two films themselves.

We believe that this event and these two films, viewed together, will be able to engage audiences in a nuanced and critical discussion on the importance of intersectional politics within LGBTQ+ spaces, and will also serve as an event to provide an in-depth look at the scope of queer politics in India.

Saturday’s screening (Sep. 22nd) will be followed by a talk with guest speakers Saboura Naqshband and Maya Indira Ganesh.

Mo’Halla is a pop-up platform for dissident culture and politics, with a special focus on South Asia. They are based in Berlin, Germany. The word “Mohalla” translates to “neighbourhood” or “kiez”, a socio-political unit that denotes the local and the immediate.  “Mo’Halla” is also a mash up of the english word “More”, and the hindi word “Halla”, which translates to “noise of protest”.

Maya Indira Ganesh Maya Ganesh is a feminist technologist who has worked in and with feminist movements for gender, sexuality and reproductive rights justice  in India and internationally.

Saboura M. Naqshband studied Arabic Studies, Political Science and Social and Cultural Anthropology in London, Cairo and Berlin. She works as an anti-discrimination and empowerment trainer especially for associations of and for LGBTI * Q refugees and migrants in Berlin and nationwide. She is particularly concerned with the topics of (anti-Muslim) racism, Muslim feminism and religion, gender and sexuality. As a project consultant at the National Association of Migrant Women Organisations in Germany (DaMigra e.V.) she was responsible for the areas of project management, outreach and advocacy. Saboura is a co-founder of the intersectional Muslim Feminist networks “Berlin Muslim Feminists” and “yantaru* collective”. Her wish is to further empower South Asian diasporic perspectives (in Germany) – as a DJ and otherwise.