A performance by ADI LIRAZ

Our bodies carry our personal and political histories. These 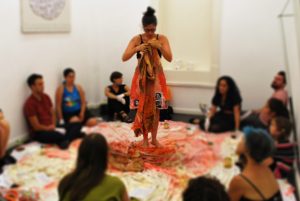 histories re-inscribe our internal and external world. Our actions in any social space are to a certain extent guided and shaped by theses scripts; Sometimes, to such extent that we reproduce our ancestral past without any conscious awareness.

This work researches through collecting, archiving, re-creating textiles and performing the story of Liraz´s grandmother, her mother, her grandmother and her great grandmother and through that shapes a Jewish identity which is independent from the colonial idea and previous to the Shoah, and rooted in the rich past of the Jewish community in Ioannina, Greece.

Through a four-chapter performance, Liraz re-creates a process of embodying history/ies and being alive as shaped and shifted by the colonial gaze of German and Israeli nationalisms. She explores the inscribed past of previous generations of her family in her own body of existence, marking the connection between the personal and the collective. By creating an organic space made out of those experiences, Liraz produces new channels to share those collectively. The interactive performance aims to create a temporarily set counter-public and a sense of solidarity.

The event will be followed by a Q&A moderated by Mai Zeidani Yufanyi .

Adi Liraz is an interdisciplinary artist. In her work, she often bridges private and public experiences, discourses and spaces. She reflects on her personal and collective identity, particularly on her role in society as a migrant, woman and mother. The aim of Liraz´s work is to generate communication and critical exposure of hegemonic perceptions.

Liraz received a BFA from the Bezalel Academy of Art and Design, Jerusalem (2001) and an MA from the Art Academy Berlin Weißensee (“Art in Public Context, Spatial Strategies”, 2014).  Between 2015 and 2016 Liraz was a member of and a coordinator for actions and eventat the Salaam Schalom Initiative, she is a founding member of NOMEN Collective and part of the duo ExDress. Liraz has exhibited, curated and performed, among others, at District Berlin (2013), Hysteria collective at Soma gallery, Berlin (2015), COVEN Berlin(2015), Musrara Mix Festival, Jerusalem (2015), 48 Hours Neukölln Art Festival (2015), Month of Performance Art Berlin (2013, 2015), Alphanova & Galerie Futura, Berlin (2016), the art vending machine at the Jewish Museum Berlin(2017) and at SAVVY Contemporary (2017). adiliraz.com

Mai Zeidani Yufanyi is a social scientist and activist. Her work explores postcolonial migration societies in Europe and the processes of identity-making in Palestine and Israel. She is a project officer with Insaan e.V., the co-host of Reboot.fm’s radio show, Talking Feminisms and an activist with the Caravan of Migrants and Refugees.