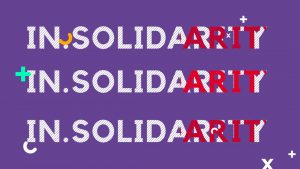 In this event, we will deal with the topic of solidarity from a cross-community perspective at various levels.

The topic will be looked at from a historical perspective as well as the current situation and possible visions for the future.

One focus will be on the resistant moment of cross-community solidarity. We want to understand this by means of historical entanglements as well as common and shared struggles. In this context, we will explore the question of what possibilities solidarity offers for dismantling power hierarchies and counteracting “divide and rule” mechanisms.

At the same time, we want to deal with power hierarchies and discursive voids within our communities and, in addition to collective memory/experience, also take into account specific (historical) experiences of individual communities. In this context we will deal with the topics of community building, media (under-/miss-) representation of communities, conflicts and marginalization(s), and (shared) knowledge production.

In an opening panel, Vanessa Thompson (European University Viadrina), Tayo Awosusi-Onutor (RomaniPhen Archive) and Ed Greve (Migrationrat Berlin) will discuss a review of the struggles of racialized communities in Germany and developments from the past 10 years until today.

In four subsequent parallel workshops, activists and scholars will have the opportunity to explore a dimension of cross-community solidarity.

Workshop 1: Comm.Unity Building – [Do you have a good idea for the German subtitle here?] – Moderation: Emine Aslan & ?

This workshop will provide an opportunity to explore the strategies, opportunities and challenges of community building. The term “community” itself will be examined in detail. What does “community” actually mean for us as individuals or in our community-near/community-oriented work and how do we deal with the field of tension between external marking and self-positioning in the context of developing identity and belonging? We will ask how attempts at division and “divide and rule” mechanisms can be identified and counteracted. Last but not least, in the context of this workshop, the topic of “Safer Spaces” could also be addressed and the extent to which a critical view of this concept is important for successful and sustainable community building could be considered.

This workshop will address the representation of certain communities in the media and the question why some communities are more visible than others and how under- or misrepresentation can be counteracted in solidarity. In this context, practical examples and options for action will be presented and discussed. What possibilities are there for setting common themes and making marginalized perspectives visible in media spaces?

This workshop will focus on cross-community and collaborative knowledge production and its transfer. In doing so, we want to deal with the following questions: Which cross-community knowledge bases already exist? How did they come about? How can marginalized perspectives and experiences irritate the dominant discourse? How can we write history(s) together without reproducing discursive dominance?

Even though communities are places where many of us can feel safe, these “spaces” are often also places where conflicts and competition take place. This applies both within specific communities and between different communities. The permanently increased stress levels caused by intersectional discrimination and social marginalization and the existential fears associated with this contribute to the fact that such conflicts and competition are additionally promoted. Added to this are supposedly or actually conflicting interests and priorities. In this workshop we want to deal with the topics of conflicts and competition.  How can conflicts be addressed without escalating? How can the potential of conflicts be used constructively? How can we be in solidarity despite these conflicts? And finally, to what extent is failure also necessary so that we can develop together as communities?

In a final panel the contents of the workshops will be brought together and ideas for alternative visions of the future will be exchanged. 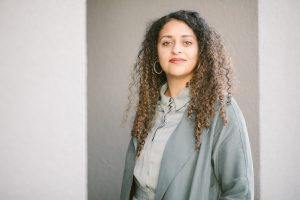 Sarah Ahmed studied Islamic Studies and Arabic Studies at the University of Vienna, Austria, where she is a lecturer and researcher in the fields and interfaces of Black Feminist Studies, Critical Race Theories, Diaspora and Religion, with a special focus on racism criticism, migration research and Black Europe. Since 2020, she has been working as a research assistant at the University of Bremen in the Department of Education and Educational Sciences, where she also deals with the topic of racism and the question of identity and affiliation of BIPoC in short stories, poems, spoken word performances and in the form of video installations. 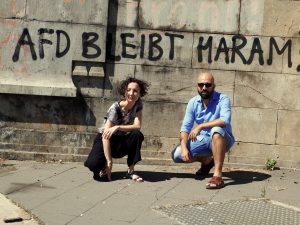 For 9 years now Tunay Önder and Imad Mustafa have been thinking, writing, curating and designing together under the label migrantenstadl. Their work focuses on social undesirable developments, sometimes critically-analytically, sometimes Dadaistically-artistically: they counter current reports from the periphery, wordayntöffs and manifestos that design a post-migrant society from below, in which the perspectives of marginalized people are the main thing and not accessories.

Tunay Önder successfully got into debt with her studies in sociology, politics and ethnology and has since been working as a migrant worker between various parallel societies such as science, pedagogy and theater. Her main interest is in a migration society free of domination and how one can approach it by talking, writing and acting. At the last Wiesbaden Biennale in 2018, she curated and organized the Migrantenstadl as a 10-day happening;

Imad Mustafa was not quite as indebted. Likes Hip Hop and Umm Kulthoum, as well as political science and sociology. Worked as a freelance author and editor for various media. Currently lecturer and researcher at the University of Erfurt. Main research and work areas: Protest research, right-wing populism and racism, political Islam, Islam in Germany and German media. 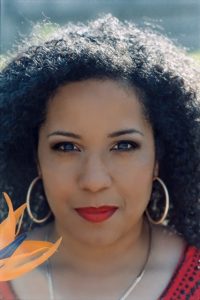 Tayo Awosusi-Onutor is singer, author, director, political activist, mother and lives in Berlin. She calls herself Afro-Sintezza. She interprets her music in English, German and Romanes. She also lends her voice to film and TV as a dubbing singer and voiceover artist. Tayo studied German and Multimedia. She is a member of the board of RomaniPhen e.V. and a member of the IniRromnja.she deals with the topics education, history and civil rights movement.2017 she published the documentary “Phral mende – Wir über uns. Perspectives of Sinti and Roma in Germany. “Tayo is also politically involved in various Communities of Colour. further information can be found at www.tayo-online.de andwww.romnja-power.deDie.

The event is being held in cooperation with the neuen deutschen organisationen in the framework of the project #CommunitiesSolidarischDenken and is supported by the Landesstelle für Gleichbehandlung – gegen Diskriminierung and Stiftung Mercator.

It is possible to register for both days as well as for one of them. Please let us know in which workshop you would like to participate when you register for the 20.11.

The event will be held online and in German. We will send the access information to all registered persons on 18.11.