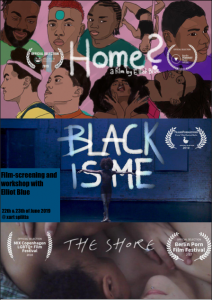 Elliot Blue also makes their own films (http://www.facebook.com/Blue.Elliot/), some of them talk about black and queer empowerment in partly strong, partly extremely vulnerable ways. They have received international recognition by being on various film festivals around Europe and ‘Home?’ has also been screened in the USA as part of a University lecture. Apart from self-expression, Elliot also has another goal for their movies: Elliot hopes that those people who recognize themselves in their movies will feel heard, seen and appreciated.
In this sense after the workshop we warmly welcome you all to watch and to listen to what Elliot and the workshop participants have to say.

We will start with the workshop participants films – if they want to share them with us and then continue with Elliot’s films:

Due to limited space please be in time.

Elliot Blue is a non-binary Filmmaker and light designer who has graduated from both their Bachelor of Film and Motion Design and their Bachelor in Camera and Lighting for Film in 2016 and 2017. Since then they work as a lighting technician and light designer in several theatres around Berlin (Dock11, Uferstudios, Theaterdiscounter) and are a freelance Filmmaker.
They also give film-workshops. For Elliot sharing knowledge about filmmaking is an opportunity to help people who get little to no adequate representation in media to empower themselves and to counter the power dynamics of a society that speaks about them but not with them and silences them in this process. This is why it is important to express oneself even if one doesn’t want to show it to anyone else but oneself.