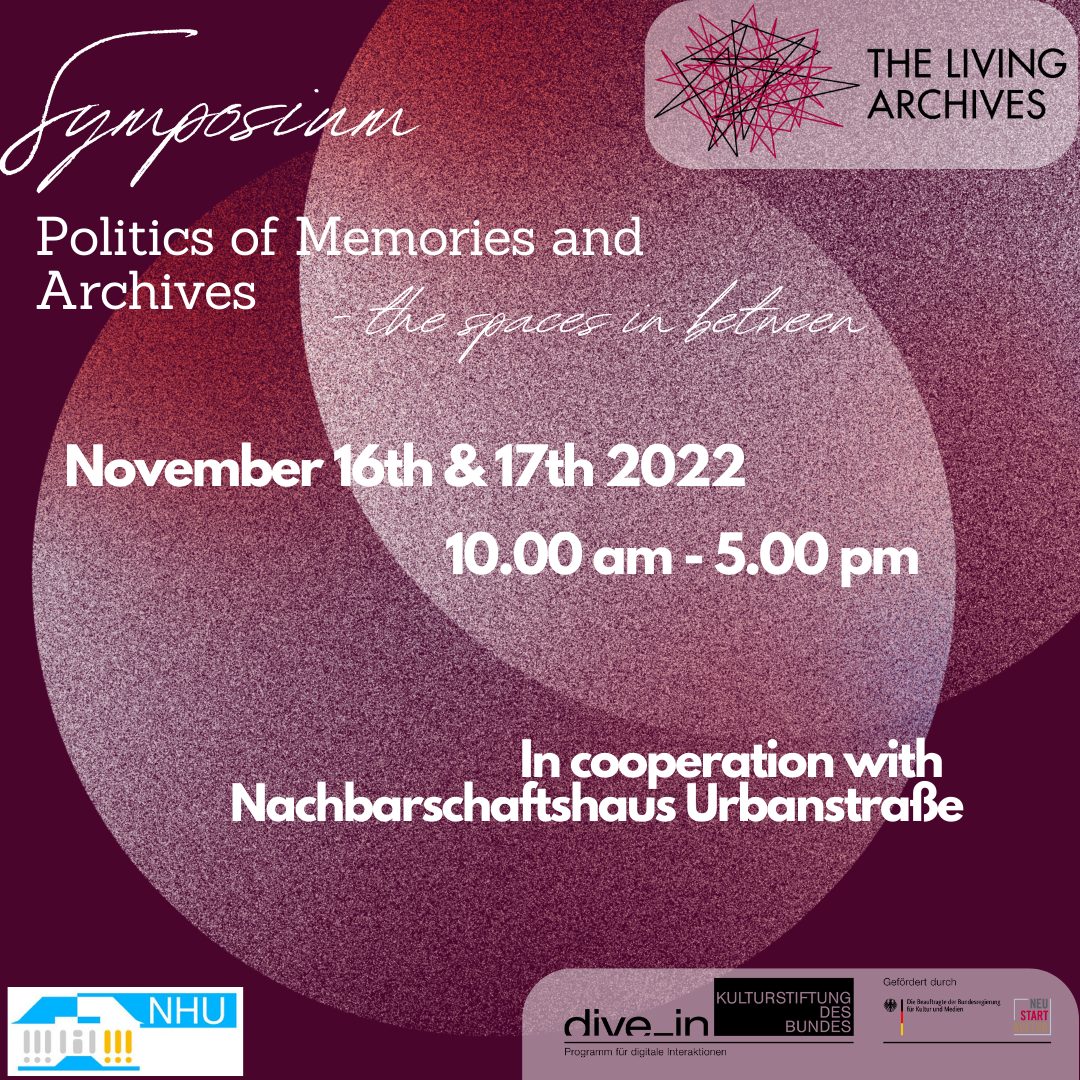 This event will take place in-presence, as well as digitally.
In German and English spoken language, as well as German Sign Language with interpretation.

These two days in November we want to address questions around the production and preservation of knowledge as well as movement-political activist memories.

With keynotes, panels and workshops, we will jointly address decolonial knowledge (re)productions and politics of memory. The processes of knowledge about intersectional discrimination or about life realities that deviate from the norm, the remembering of activist struggles, persons or places are fundamentally affected by structural erasure or are pushed to the margins of society in their right to exist. We will therefore move together into the spaces in between. In-between spaces in which our stories are preserved and passed on so that we can now expand out of these social niches and digital subspaces with our processes of resistance.

Pls. find here further informationen about the workshops and our facilitators/panelists.

Registration:
Participation is only possible with prior registration. Some workshops are designed safer spaces and are only open to BIPoC. The number of participants is limited. People with experiences of discrimination will be given priority in registration.

Pls. register via contact@xartsplitta.net. Registrations by written, video and audio are possible.

When registering, we would appreciate receiving your thoughts on the following points:

This event takes place within the developement of the project The Living Archives and as part of “dive in. Programme for Digital Interactions” of the Kulturstiftung des Bundes (German Federal Cultural Foundation) with funding by the Federal Government Commissioner for Culture and the Media (BKM) through the NEUSTART KULTUR programme.” 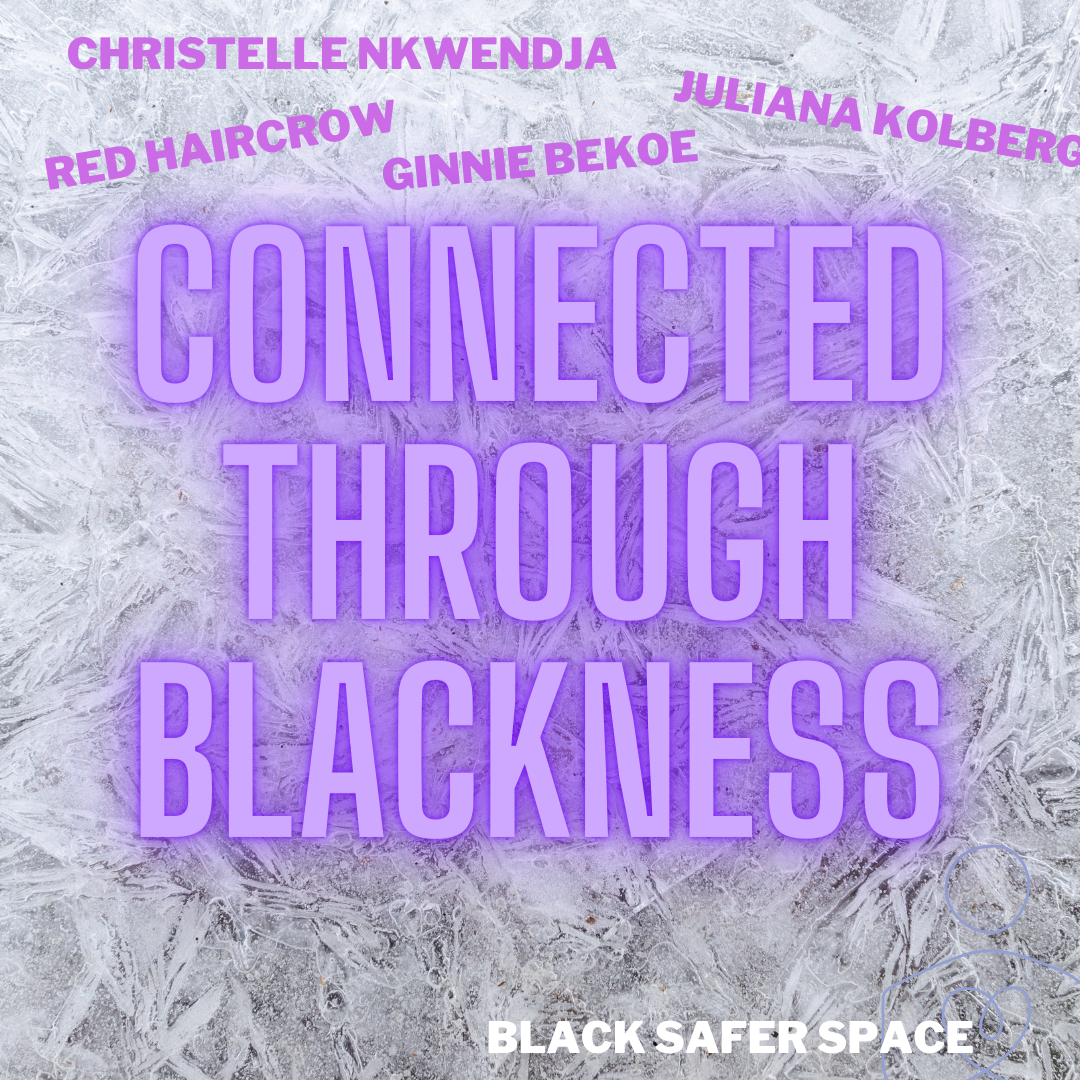 Join us for a lunch chat and let’s talk about how Blackness connects us.

Being Black is wonderful. It is strong and soft and magical and creative and it is most definitly complex. It is no one time moment – or person – it changes and liberating our Blacknees needs individual process.

Blackness is, in aspects, constructed in conformity with the norm, just like everything else. To talk about differences that need to be pointed out we need spaces, braver spaces as well as safer spaces. What does intersectional experiences within Blackness mean, what effects does that have on our Black Bodies? What different perspectives on Blackness shall we talk about and re_center more? How can we create a community where all kinds of Blackness are welcomed and accepted?

Moderated by Juliana Kolberg we will talk with Ginnie Bekoe, Christelle Nkwendja and Red Haircrow.

This space is for Black People only and will take place in English spoken language.

Ginnie Bekoe is a Black activist who does talks, workshops and poetry primarily on the muddlings of Blackness, disability, fatness & queerness. Ginnie draws from their own identities and experiences, as well as knowledge that has been passed on (even from books!). Ginnie also deals extensively with baby elephants and ice cream.

Red Haircrow is an award-winning writer, educator, psychologist and filmmaker of Native (Chiricahua Apache/Cherokee) and African American heritage, who holds a Master’s in Native American/Indigenous Studies and a BSc in Psychology. Their interests and research focuses include Indigenous game development, GLBTIIQ2S needs and suicide prevention, and inter-generational historic trauma of marginalized and minoritized groups and peoples. redhaircrow.com/ and flyingwithredhaircrow.com/.

This workshop will take place in presence and in English spoken language.

This workshop is an invitation to create your own self-care toolbox for challenging times.

All of us have life experience, self-knowledge and resources available to us – usually more than we think! How can we harness these resources to soothe, regulate and empower? To carry us through hard times? And how do we care for ourselves in situations that we can’t change or solve at this moment?

In this workshop we will identify situations that trigger us, learn to recognize when we are in survival mode, explore the individual and shared resources we have, and compile this knowledge into a tool to use when things are tough.

You will leave the workshop with a physical toolbox full of ideas and resources to care for yourself. It’s gonna be fun and we’re going to get creative!

This workshop is a safer space for BIPoC.

Dee (she/her) is a certified life coach, kink coach and death doula with a range of classic, creative and unconventional tools under her belt to support you on your path.

Her approach is one of balance, of finding ways to navigate this material world in a way that meets your needs while remaining true to yourself – of being human in a world in flux.

Her experience is informed not only by her formal qualifications, but most importantly by her upbringing in the tropics, her eagerness to try anything once and her own ongoing process of growth and change, the lessons of which she is here to share. 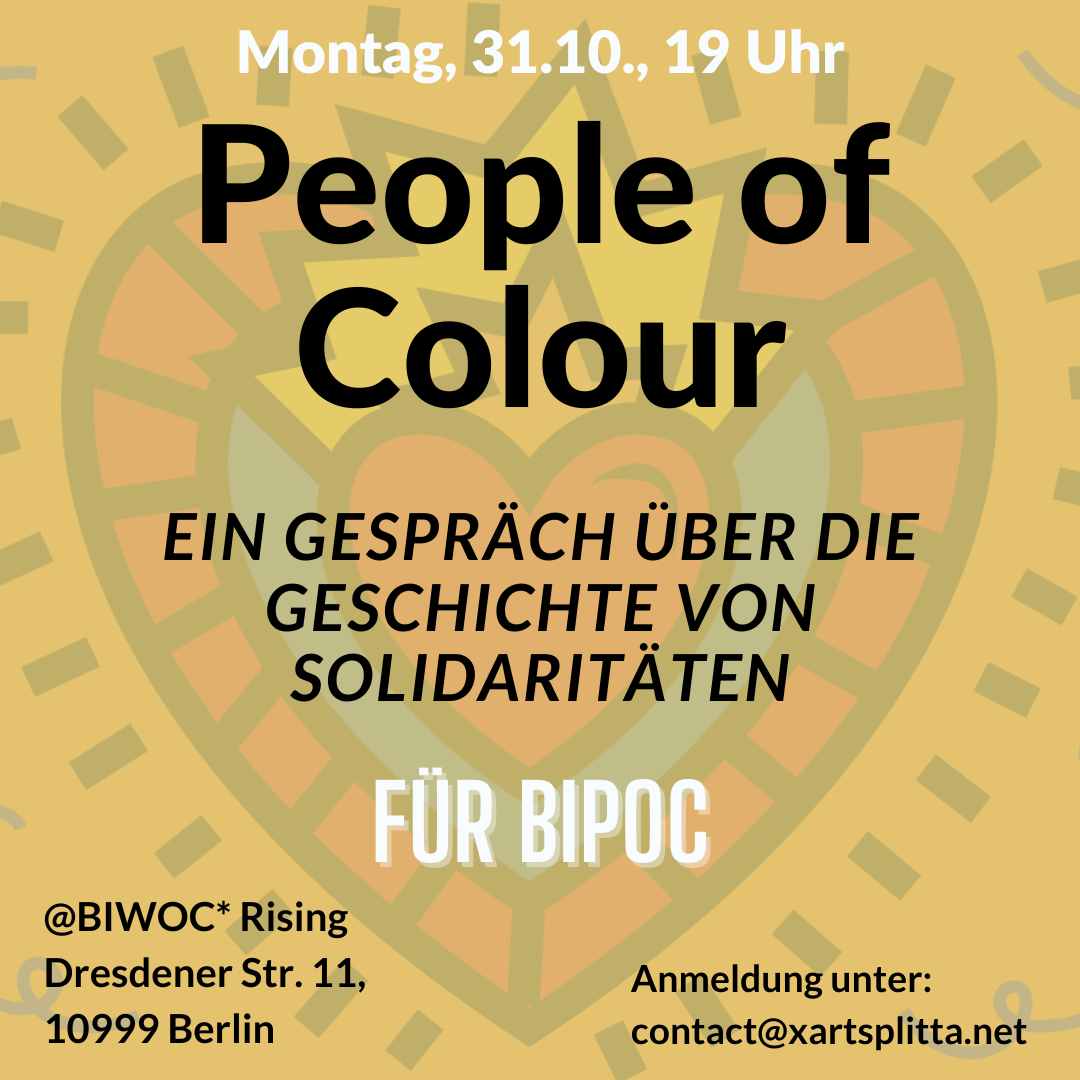 This event will take place in German spoken language. 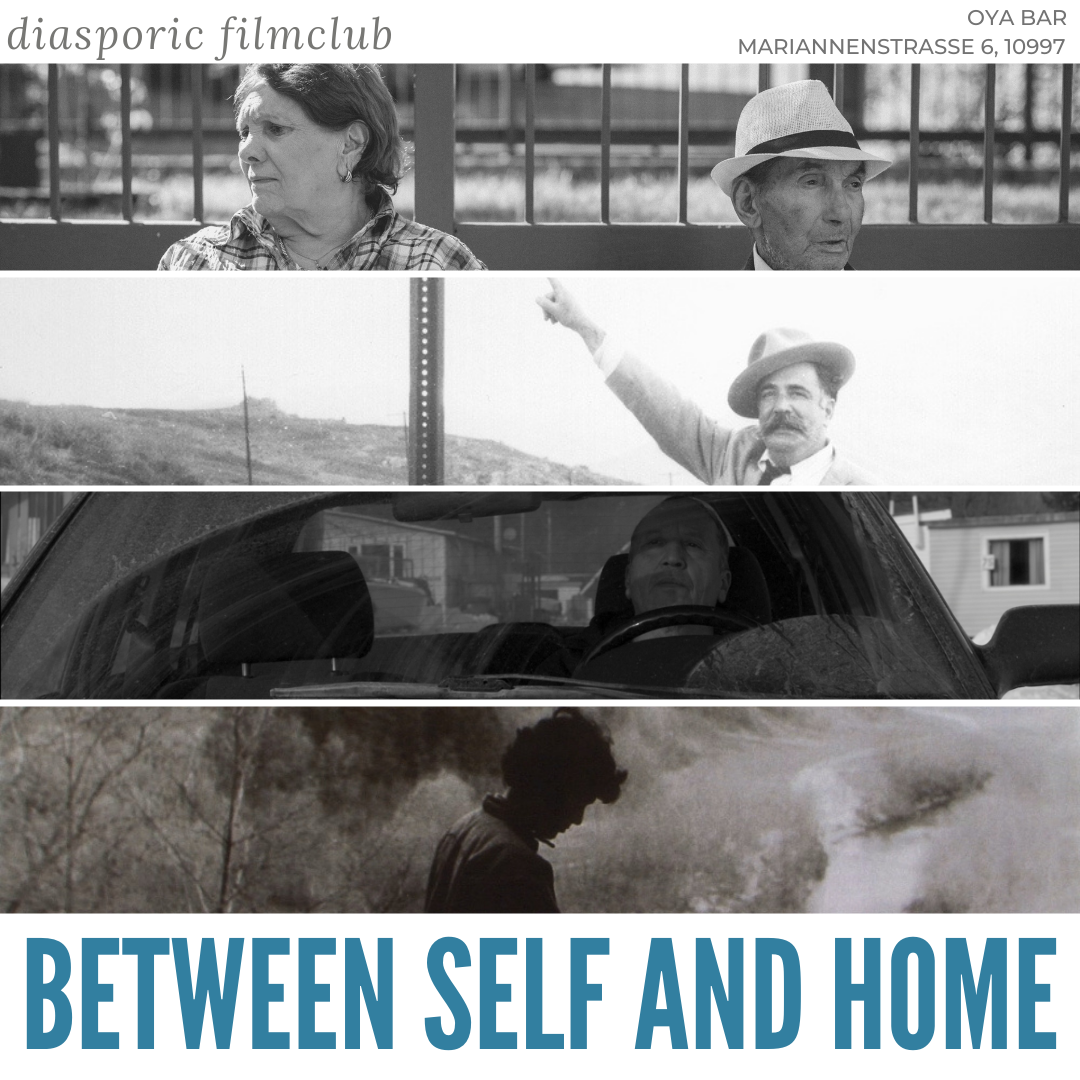 For those deracinated subalterns, “home” has become “another country”. Losing home is not only losing a material shelter or geographical place but above all it means losing a social world in which your life was previously shaped. That created new generations whose cultural aspirations and references are inevitably different from those of their parents and ancestors.

The film program consists of films on our roots that are no longer in their original soil. Stories that sometimes become an ode to or a quest towards our lost homelands.

Where is home? What does ‘homeland’ mean for us?

The diasporic filmclub “Between Self and Home” is a cooperation with POC Art Collective, curated by Nahed Awwad and Necati Sönmez and OYA BAR Kreuzberg.

Together we invite you to watch, share stories and have discussions around these essential questions of what and where home is, sometimes accompanied by the filmmakers.

Necati Sönmez works as a film critic, curator and filmmaker. He is the initiator of Which Human Rights? Film Festival and one of the founders of the Documentarist Film Festival, which soon became the most important documentary film festival in Turkey. He has been a jury member at over thirty festivals and curated various documentary film programs.

Nahed Awwad is an independent Palestinian filmmaker and film curator based in Berlin. She has worked in films and television since 1997. Nahed received her diploma from the European Film College in Denmark and has since released eight films, e.g. “25km”, “Going for Ride?”, “5 minutes from home”, “Gaza Calling”.

Nahed Awwad and Necati Sönmez are a part of the POC Art Collective.
POC Art is an art collective based in Berlin consist of artists and curators who emphasise the art of People of Color. POC Art aims at organizing cultural events such as film screenings, concerts, talks, and workshops. An earlier event was a series of film screening and concerts under the title of “Music Beyond Borders”

OYA BAR is a queer-feminist Collective, running the Bar space at Schokofabrik in Kreuzberg, Berlin. It’s aim is to provide a Café, Bar, community place as well as home and safer space especially for queer BIPOCs.

Let’s continue to take care of each other!
Feel free to test yourself before coming and wear mask if possible.

Their Algeria by Lina Soualem

After 62 years of marriage, Lina’s grandparents, Aïcha and Mabrouk, separate. They came from Algeria to France 60 years ago. Side by side, they experienced a chaotic immigrant life. Their separation is an opportunity to question their journey of exile.

Lina Soualem
French-Palestinian-Algerian filmmaker and actress, born and based in Paris. After studying History and Political Science at La Sorbonne University, she started working in journalism and as a programmer in film festivals, looking to combine her interests for cinema and the study of contemporary Arab societies. Lina worked as a programmer for several film festivals. Her debut film “Their Algeria” premiered in Visions du Réel International Film Festival.

A Year in Exile by Malaz Usta

An immigrant’s first year in a metropolitan city outside his small country. Through a collection of moving images and sounds the film exhibits what he faces, the pictures that he sees, the crowded thoughts in his head, and the state of emotional shock that he lives in.

Malaz Usta
Damascus born Malaz Usta moved to Turkey in the beginning of 2016. In 2014 he started working as a graphic designer and film editor. In 2018 he started studying Radio, TV, and Cinema at the Faculty of Communication in Marmara University. He is also continuing his double major studies in Film Design at the Faculty of Fine Arts.

In the year 1964, famous author William Saroyan took a journey to his birthplace in Bitlis, located in historic Armenia. This docu-drama traces the actual path of that journey and aims to understand Saroyan’s unique attitude to belonging, witnessing the self-discovery of a man who followed the traces of his Armenian ancestors.

Lusin Dink
After graduating from Istanbul Bilgi University’s Cinema-TV Department, Dink began her career as assistant director. She has worked for about ten years in many national and international productions and shot her first feature docu-drama SaroyanLand in 2012 which has premiered at Istanbul Film Festival. The film did its international premiere at Locarno Film Festival the same year and screened in over 20 national and international film festivals, winning the Best Balkan Film Award in Sofia and Best Documentary Award in Yerevan.

After the political crisis in Kanesatake’s reserve, Arihote, a Kanienkehaka “Mohawk”, sometime war photographer, and his wife parted ways. While trying to help his son who has committed a misdemeanor, Arihote happens upon the revenge killing of a neighbor by Wedad, a Palestinian refugee. Loath to get involved in a police investigation, Arihote finds himself helping Wedad to leave the crime scene. Arihote finally begins to rebuild his relationship with his son, and to focus on resolving his feelings about both his wife’s departure and his father’s suicide.

Majdi El-Omari
After working in the Middle East as an assistant director and production manager on various feature and documentary films, El-Omari became a filmmaker, scriptwriter, producer and editor. El-Omari’s short films d’auteur have been selected in several international festivals. “Standstill” was his debut feature film. El-Omari lives in between Haifa and Montreal now is writing his next feature film while teaching fiction filmmaking in Dar al-Kalima University in Bethlehem.

You Come From Far Away by Amal Ramsis

Amal Ramsis
Amal Ramsis is an Egyptian filmmaker who was born and raised in Cairo. She has studied cinema in Madrid between 2002-2005. She has conducted numerous workshops around the world with women who have no experience in filmmaking at all. Ramsis is the founder and the director of Cairo International Women’s Film Festival. Her films “Only Dreams” (2005) “Life” (2008), “Forbidden” (2011) and “The Trace of the Butterfly” (2014) have got several international awards and been screened in many festivals.

Flyer Between Self and HomeHerunterladen