A Talking Dance Duet by Dr. Priya Srinivasan in collaboration with 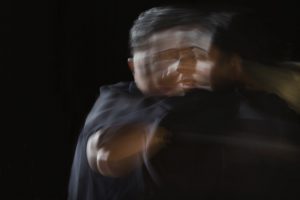 Carnatic vocalist Uthra Vijay, Visual Design and photography by Arun Munoz. This performance features the poetry of Tamil women and heroines through time such as Avvayar from 3rd Century BCE to Kannagi, Andal, and a more recent female Tamil war colonel from Sri Lanka. Their texts and perspectives are placed in conversation with Srinivasan’s contemporary perspectives on the war on women and women’s bodies. At the same time the performance explores queer desire in this context. How can we reimagine alternate feminist aesthetics from the perspective of Tamil women’s engagement with war, violence, injustice, desire, and choice?

Uthra Vijay is the Artistic Director of Keerthana School of Music in Melbourne . She is an accomplished classical Indian Music Vocalist, composer and educator, winning several awards and performing in a range of venues in India, Australia and Europe. She has been collaborating
with Dr. Priya Srinivasan in unique experimentations between music dance. Her primary goal is to work both for the South Asian communities of Melbourne and for wider communities to open minds and hearts through music.

Dr. Priya Srinivasan is a dancer, scholar and choreographer originally from Melbourne who combines theory and practice. She has a PhD in Performance Studies from Northwestern University and has created the form of “talking dances” based on her award winning book “Sweating Saris Indian Dance as Transnational Labor.” Her work brings together live bodily performance with visual art, music, interactive multimedia and digital technology to think about archives of the body, migration, and
female labor working with many collaborators -foremost among them is Carnatic singer Uthra Vijay. Her work has been presented in diverse settings in many theatre houses, galleries, universities, museums,
parks, historic buildings, and in public spaces around the globe. Her goal is to use art to create connections and bring down walls between diverse peoples.

Dr. Sandra Chatterjee is founding-member of the Post Natyam Collective, teaches, researches, performs and organizes projects at the intersection of theory and artistic practice, focusing on gender, postcolonial and migration studies. Her current research critically interrogates “contemporary” dance (in Europe) in the context of articulating culturally marked aesthetic difference/multeity. www.sandrachatterjee.net